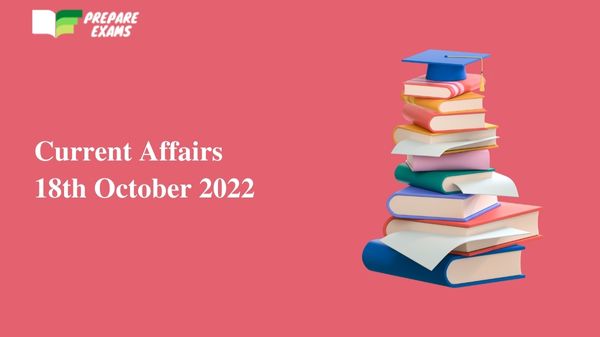 Ministry of Youth Affairs and Sports, FSSAI and NFSU sign MoU for setting up the testing facility for dietary supplements

Ministry of Youth Affairs and Sports (MYAS), the Food Safety and Standards Authority of India (FSSAI) and the National Forensic Sciences University (NFSU) signed a Memorandum of Understanding (MoU) for establishing the testing facility for dietary supplements. Smt. Sujata Chaturvedi, Secretary, Department of Sports, MYAS, Smt. Ritu Sain, Director General, NADA and other officers of the Ministry, FSSAI and NFSU were present on this occasion.

India has fallen six places to rank 107 on the Global Hunger Index (GHI), 2022, out of 121 countries With a score of 29.1. the publishers of Global Hunger Index, European NGOs Concern Worldwide and Welthungerhilfe declared the level of hunger as serious.

CII-EY Report: Foreign investment in India may reach $475 b in next five years

As per the CII-EY report, India can have growth prospects for foreign investments with a potential to attract FDI flows of USD 475 billion in the next 5 years. Foreign Direct Investment (FDI) in India was increased in the last decade with FY2021-22 receiving FDI inflows of $84.8 billion.

Paytm Payments Bank has appointed Deependra Singh Rathore as the interim chief executive officer (CEO), in addition to his role as chief product & technology officer. the bank is looking to strengthen its leadership with seasoned executives from the banking and financial services industry towards digitalisation of the whole banking sector and paperless transactions.

Asian Football Confederation (AFC) announced that Qatar will host next year’s Asian Cup in place of original host China after seeing off rival bids from South Korea and Indonesia.

Every year, World Trauma Day is observed on 17 October across the world to focus on the importance of saving lives and safety during the most critical moments of preparedness and adopting important measures.

International Day for Eradication of Poverty 2022

Every year, International Day for the Eradication of Poverty is observed on 17 October across the world to raise awareness about the global issue of poverty and how it is a violation of human rights and of human dignity.

Every year, World Food Day (WFD) is celebrated on October 16th in the world. the main purpose of this day is to eradicate worldwide hunger from our lifetime. it also raises awareness and collective action to combat the issue of hunger and ensure healthy diets for all.