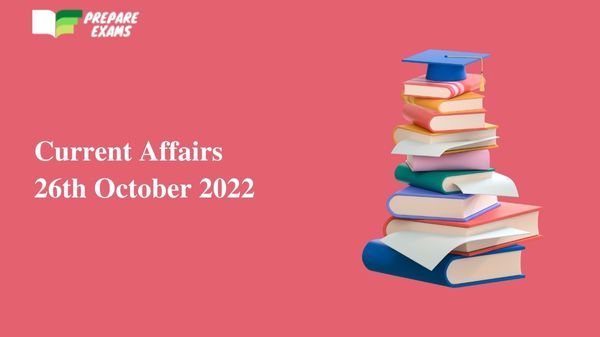 Prime Minister Shri Narendra Modi today launched the first phase of “Rozgar Mela”, a recruitment drive for 10 lakh central government jobs through video conferencing in 50 centers across the country. during the event, Appointment letters were presented to more than 75,000 newly appointed persons.

Novartis AG agreed to allow generic drugmakers in 7 middle-income nations to produce a leukemia treatment as part of a public health initiative, the first time a voluntary license has been granted for a patented cancer drug.

Belgium’s Max Verstappen of Red Bull Racing has become the winner of the 2022 Formula 1 Aramco United States Grand Prix 2022. US Grand Prix 2022 was held at the Circuit of the Americas in Austin, Texas, United States (US). also, he has equaled Germany’s Sebastian Vettel and Michael Schumacher’s record of 13 wins in a Formula 1 season.

He defeated the UK’s Lewis Hamilton of Mercedes who ranked in 2nd place in the race. Leclerc salvaged a podium finish for Ferrari.

Akshay Shah and Stephen Alter have compiled and edited a new book titled “The Corbett Papers: Biographical, Legal, & Contextual Material on the Life & Career of Jim Corbett of Kumaon” which is about Jim Corbett, the famous naturalist­hunter, has penned down a series of bestsellers about his experiences with wildlife in the jungles of North India.

Red Bull Formula One owner Dietrich Mateschitz passes away at 78

Austrian billionaire Dietrich Mateschitz, the co-founder of energy drink company Red Bull and founder and owner of the Red Bull Formula One racing team, has passed away at the age of 78. The Red Bull Racing team got successful in Formula 1, winning the constructors’ championship in 2010, 2011, 2012, and 2013.

National award recipient director of Bengali films, Pinaki Chaudhuri, died at the age of 82 at his Kolkata residence following a protracted illness. He was suffering from lymphoma, a cancer of the lymphatic system.

Global Media and Information Literacy (MIL) Week 2022 is being observed between October 24 and October 31. The Global MIL Week 2022 focuses on trust and solidarity as it links to people, media, digital platforms, governments, the private sector, and non-governmental organizations.

Every year, World Egg Day is celebrated on the Second (2nd) Friday of October month across the world since 1996 to promote awareness about the great nutritional worth of eggs.

Every year, ITBP raising day is celebrated on 24 October in India to mark the dedication of the ITBP to defending the borders of the nation. in 2022, the 61st Indo-Tibetan Border Police Raising day was observed.

Every year, World Polio Day is celebrated on 24th October across the globe to raise awareness about the polio vaccination and eradication of polio from every corner of the world.

World Development Information Day is observed on October 24th annually to create awareness of the problems surrounding development in different nations and how to overcome them. The main purpose of this day is to improve the dissemination of information and mobilize public opinion, especially among young people.

Every year, Ayurveda Day is observed on the day of Dhanwantri Jayanti since 2016. Dhanvantari is the Hindu god of medicine. In 2022, India celebrated the 7th National Ayurveda Day on 23rd October.

The tenth International Lead Poisoning Prevention Week (ILPPW) will be observed from 23-29 October 2022. International Lead Poisoning Prevention Week aims to draw attention to the health impacts of lead exposure, highlight efforts by countries and partners to prevent childhood lead exposure, and accelerate efforts to phase out the use of lead in paint.