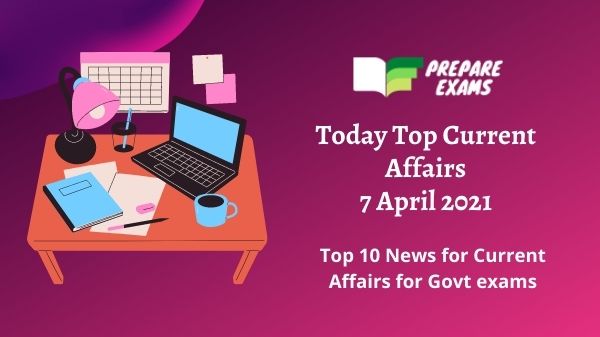 On 5th April 2021, global financial institution J.P. Morgan has made a partnership with BillDesk in order to provide online payments solutions across the India.

On 5th April 2021, The Reserve Bank of India (RBI) has cleared an amount of 21,658.73 crores towards Cash Credit Limit (CCL) in order to make procurement of wheat in Punjab.

About Reserve Bank of India (RBI) –

Association for Computing Machinery (ACM) has named Alfred Vaino Aho and Jeffrey David Ullman for ACM A.M. Turing Award 2020. the recipients will be honoured with this award for fundamental algorithms and theory underlying programming language implementation.

The fiscal deficit of India has stood at ₹14.01 trillion ($191.61 billion), or 76% of the revised budgeted target for the whole fiscal year in the 11 months to the end of February (government data showed).

FDI equity inflows into the country have raised by 28 per cent during April-January 2020-21, the data was released by the Commerce and Industry Ministry.

The National Council of Applied Economic Research (NCAER) has elected Poonam Gupta as its new director-general. her appointment will come into effect from July 1st, 2021.

Indian Institute of Technology, Kanpur, (IIT-K) has successfully developed a touch-sensitive watch. this watch will be helpful for visually impaired people to sense time accurately.

How A touch-sensitive watch Works

The Samajwadi Party Founder member Shri Bhagwati Singh has passed away at age of 89. he was also a former UP minister.

On 6th April 2021, Veteran Kannada author Mumtaz Begum has passed away at the age of 73. She was suffering from a brief illness.