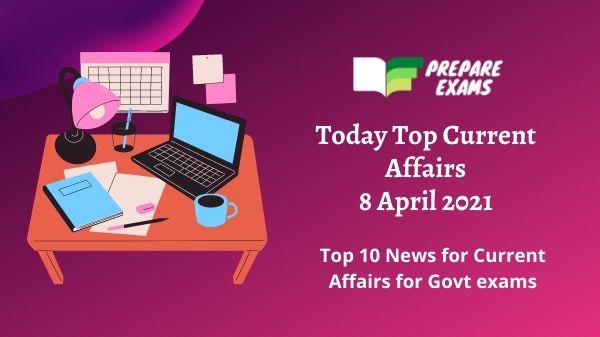 Professor Suman Chakraborty is elected for the 30th GD Birla Award for Scientific Research. Suman Chakraborty has given his outstanding contribution to engineering science and its applications in developing technologies for affordable healthcare.

Kosovo’s new president Vjosa Osmani-Sadriu has assumed the post and becomes the country’s youngest head of state and one of the youngest in the world.

P. Balachandran has passed away at age of 69 at his home in Vaikom. He was suffering from illness for several months and died on 5th April 2021.

In Dubai, Former Mumbai cricketer and “Kanga League” giant Mehli Irani has passed away at the age of 90.

87 years old Radheshyam Khemka has taken his last breath. he was suffering from a brief illness and served as The President of Gita Press.

Every year, World Health Day is observed on 7th April across the world. On this Day, the World Health Organisation (WHO) was established on 7 April 1948.

International Day of Sport for Development and Peace 2021

The day of 6th April is observed as International Day of Sport for Development and Peace (IDSDP) every year across the globe.

International Day of Reflection on the 1994 Rwanda Genocide 2021

The day of 7th April is observed as International Day of Reflection on the 1994 Genocide against the Tutsi in Rwanda every year across the world. this day marks the genocide against members of the Tutsi.