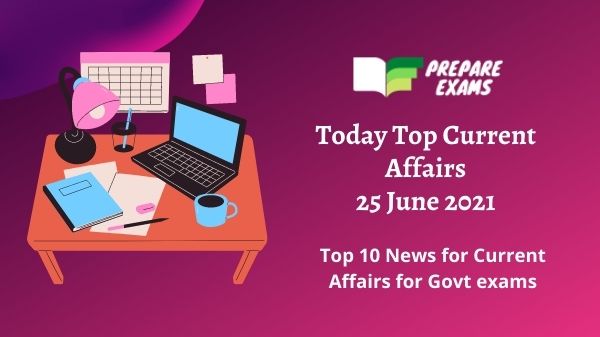 On 22nd June 2021, The world’s first genetically modified (GM) rubber plant was planted by Rubber Board chairman and executive director KN Raghavan at the board’s farm in Sarutari near Guwahati, Assam.

The state Govt of Tamil Nadu has formed a five-member Economic Advisory Council to the Chief Minister. The five-member Economic Advisory Council will help in providing general guidance to state Chief Minister MK Stalin in managing the economic and social policies, social justice, and human development-related issues, and in matters related to equal opportunities for women and well-being of underprivileged groups in the state.

On 23rd June 2021, New Zealand won the first ICC World Test Championship, defeating the Indian Team. The match had 6 days of play in place of the regular 5 days due to the rain factor.

Kotak Mahindra Bank has made an announcement about the launch of ‘Pay Your Contact’. it will enable its customers to send money or make payments to any of their contacts across all payment apps simply by the beneficiary’s mobile number.

On 22nd June 2021, The Health & Family Welfare Union Minister Shri Harsh Vardhan has launched a new book named “My Joys and Sorrows – as a Mother of a Special Child”

Autobiography “Will” by American Actor Will Smith, is to be released in November 2021

The American actor, rapper, and film producer, Willard Carroll Smith has introduced his autobiography named ‘Will’. The Will Book will be released on November 09, 2021, and Penguin Press will publish Autobiography ‘Will’ in November 2021

OnePlus has decided to appoint Indian Cricketer Jasprit Bumrah as Brand Ambassador for its Wearables category. OnePlus is going to launch a 360-degree campaign Under the partnership with Bumrah and also, will be started by a ‘OnePlus x Jasprit Bumrah’ digital film on OnePlus India YouTube and Instagram platforms.

Malayalam cinematographer-filmmaker Sivan passes away at 89

On 24th June 2021, Three-time National-Award-winning cinematographer and filmmaker Sivan passed away at the age of 89. Sivan was a famous photographer and he started his career in the film industry with Chemmeen (1965).

Sivan is survived by his four children –

John McAfee, the founder of McAfee antivirus software, Dies at 75 by suicide

John David McAfee has passed away at the age of 75 “apparently from suicide”. McAfee was the British-American Software pioneer and was the founder of the McAfee antivirus software.