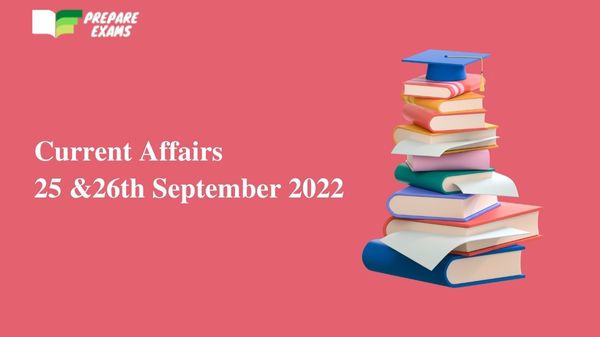 Indian Govt has launched a Scheme Special Assistance to States for Capital Investment for 2022-23. Under this Scheme, States Governments will be provided financial assistance in the form of a 50-year interest-free loan for capital investment projects.

India’s First Forest University to be Established in Telangana

World Bank has approved a $350 million or over ₹2,832 crore loan to Gujarat in order to augment health services with a special focus on adolescent girls and disease surveillance in the state.

Vitamin Angels India has partnered with UNICEF India for Poshan Maah 2022. the partnership aims to implement a comprehensive, unified outreach and awareness program to enhance nutritional content, delivery, outreach, and outcomes with a renewed focus on fostering health, wellness, and immunity to disease and undernutrition and is to keep in line with the POSHAN Maah campaign by the central government.

The Cochin International Airport Limited (CIAL) received the Airport Service Quality (ASQ) award 2022 by the Airport Council International (ACI) in the 5-15 million passenger category of airports operating in the Asia-Pacific region and is considered to be the highest honour in the global aviation sector.

The Centre has appointed Justice M N Bhandari as the Chairman of the Appellate Tribunal under the Prevention of Money Laundering Act (PMLA) for a period of 04 years, or till attaining the age of seventy years, or until further orders. Justice Bhandari retired on September 12. The post of the Chairperson of the Tribunal was vacant since September 2019.

The National Payments Corporation of India (NPCI) has decided to reappoint Dilip Asbe as the managing director and chief executive officer (MD&CEO) of the company for a period of five years with effect from January 8, 2023.

Dr Rajiv Bahl has been appointed as Director General of the Indian Council of Medical Research (ICMR) and Secretary of the Department of Health Research for a period of three years after Dr M Srinivas was appointed the director of AIIMS-New Delhi. currently, Dr Rajiv Bahl is with the World Health Organisation.

HDFC ERGO General Insurance Company Limited has partnered with HDFC Life to launch Click2Protect Optima secure to offer all-around protection to customers on 23rd September 2022. HDFC ERGO will offer un-complicated financial planning for customers by offering the term life insurance with a minimum sum assured of ₹50,000 under the partnership.