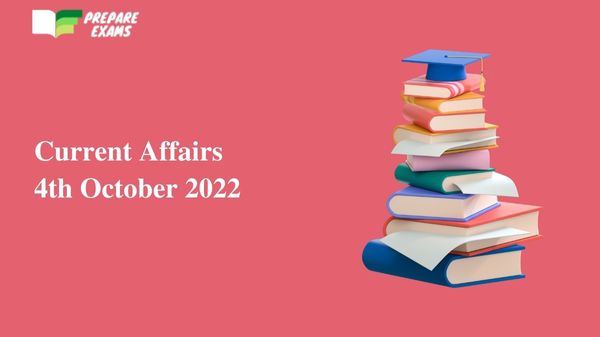 India celebrated 8 years of the Swachh Bharat Mission and the first anniversary of SBM-Urban 2.0 and President Droupadi Murmu felicitated the awardees of the cleanest States and cities at the award ceremony of Azadi@75 Swachh Survekshan 2022. Ministry of Housing & Urban Affairs (MoHUA) conducted an award ceremony as part of Swachh Bharat Mission-Urban 2.0 at Talkatora Stadium, New Delhi.

Dr Jitendra Singh launched the exclusive “Swachhata” Portal for the Special Campaign 2.0, which has been scheduled to begin on October 2. Department of Administrative Reforms and Public Grievances (DARPG) Developed the “Swachhata” Portal [www.pgportal.govlin/scdpm22] for Special Campaign 2.0. It is dedicated to Swachhata and reducing the pendency of work in Government offices.

Indian Navy signed with the Royal New Zealand Navy an agreement on White Shipping Information Exchange to promote greater transparency in the Maritime Domain. The white shipping information refers to the exchange of prior information on the movement and identity of commercial non-military merchant vessels.

Indian-origin General Atomics CEO Vivek Lall has been honoured with the Lifetime Achievement Award by US President Joe Biden with the citation of ‘With Grateful Recognition’.

Sharat Sabharwal has penned his new book titled ‘India’s Pakistan Conundrum — Managing a Complex Relationship’. The Book highlights the relationship between India and Pakistan has been mired in conflicts, war, and lack of trust. it also examines the nature of the Pakistani state, its internal dynamics, and its impact on India.

P Sainath will release a new book on India’s freedom struggle titled “The Last Heroes” which has been scheduled for release on November 21, celebrates little-known fighters — farmers, labourers, homemakers, forest produce gatherers, artisans and others — from India’s freedom struggle as it tracks the role of ordinary, everyday people in achieving Independence.

Tulsi R Tanti, the founder, chairman and managing director and one of the key promoters of Suzlon Group and Suzlon Energy Limited, passed away due to cardiac arrest on October 1. He also served as the chairman of the Renewable Energy Council of the Confederation of Indian Industry (CII) to provide direction to India’s green energy strategies.

Every year, National Voluntary Blood Donation Day is observed on October 1st in India to share the need and importance of blood in the life of an individual. It was first celebrated on the 1st of October in the year 1975 through the Indian Society of Blood Transfusion and Immunohaematology.

The Nursing Officers of the Military Nursing Service at Jaipur Military station celebrated 97th Raising day on 01 October 2022. On 1 Oct 1926, the Armed forces were transformed into the permanent Nursing Service from back to 28 Mar 1888 with a handful of British Nurses.

Every year, The International Day of Non-Violence is observed on October 2nd across the world to mark the birth anniversary of the Father of the Nation, Mahatma Gandhi. it is also known as Gandhi Jayanti in India. The day aims to spread awareness about the idea of non-violence either through education or any other methods.

Every year, the Department of Drinking water and sanitation (DDWS), the Ministry of Jal Shakti celebrate Swachh Bharat Diwas (SBD) on 2nd October to commemorate the birth anniversary of Mahatma Gandhi. The Swachh Bharat Diwas is inspired by one of the quotes of the father of the nation, “Cleanliness is next to godliness”.