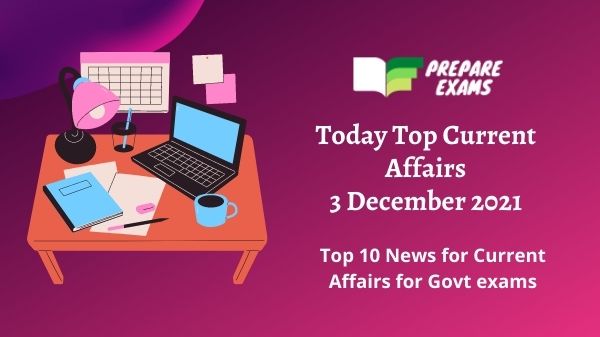 On 1st December 2021, Nagaland citizens have celebrated 59th Statehood Day. in 1963, Nagaland was granted statehood with Kohima being declared as its capital.

V Praveen Rao has won the 7th Dr M S Swaminathan Award for the period 2017-19 for the award recognising his contributions in the fields of ‘agricultural research, teaching, extension and administration’.

Arunachal Pradesh state government has roped in Bollywood actor Sanjay Dutt as the brand ambassador and award-winning filmmaker and branding expert Rahul Mittra as brand advisor of the occasion of their golden jubilee celebrations for the ‘50 Years of Arunachal Pradesh’ celebration.

Narotam Sekhsaria (Former Vice-Chairman/Founder/Promoter, Ambuja Cements Ltd) has penned a new autobiography titled “The Ambuja Story: How a Group of Ordinary Men Created an Extraordinary Company”. his autobiography will be released in December 2021.

Economist Intelligence Unit’s (EIU) has released the Worldwide Cost of Living 2021, exploring the cost of living in 173 cities, measured against impactful global events. as per the index, Tel Aviv, Israel has been selected as the most expensive city in the world to live in in 2021.