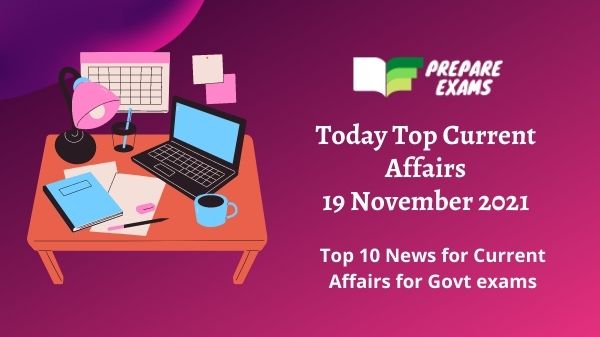 President Ram Nath Kovind reached Sui village in the Bhiwani district of Haryana and has inaugurated various public facilities in the village.

The Asian Infrastructure Investment Bank (AIIB) has approved a USD 150 million loan to the Indian Government of India. the loan amount will be used for the implementation of the Sustainable Urban services program for the Chennai Metropolitan Area (CMA).

India as UNESCO Executive Board for 2021-25 term

India is re-elected to the Executive Board of UNESCO for the term 2021-25 after winning The election of members of the executive board with 164 votes.

About UNESCO Executive Board

Sanjay Kumar Mishra gets one year extension as ED Director

department of revenue issued a notice

Spain’s Garbiñe Muguruza has won her first WTA Finals Championship and in the final, Muguruza defeated No.8 seed Anett Kontaveit of Estonia, 6-3, 7-5.

In India, Newborn Care Week is celebrated every year from 15 to 21 November. the main objective of celebrating the week is to raise awareness about the importance of newborn care for child survival and development.

Every year, World Antimicrobial Awareness Week (WAAW) is celebrated from 18-24 November across the world. the main purpose of this day is to increase awareness of global antimicrobial resistance, encourage best practices among the general public, health workers and policymakers to avoid the further emergence and spread of drug-resistant infections.

Every year, World Toilet Day is celebrated on 19 November across the world by a partnership between the UN-Water body and governments. it aims to bring awareness about the importance of toilets and sanitation in our lives.