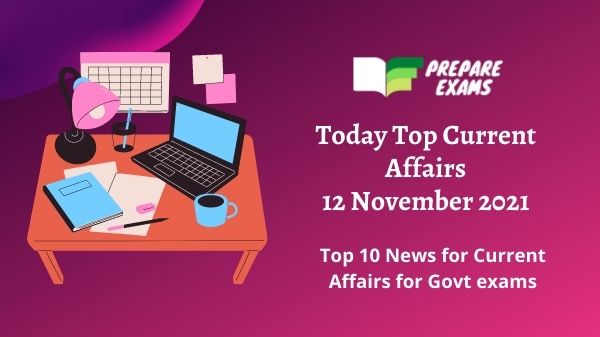 NASA and SpaceX have launched the “Crew 3” mission on a flight to the International Space Station on November 10, 2021. Crew 3 mission to ISS includes four astronauts including a veteran spacewalker and two younger crewmates chosen to join NASA’s forthcoming lunar missions.

Rajeev Srivastava has been appointed as the chief executive officer at Standard Chartered Securities (India).

The former president of South Africa and the last white person to head the country Mr FW (Frederik Willem) de Klerk has passed away at the age of 85. he was suffering from cancer.

Every year, Public Service Broadcasting Day is observed on 12th November in India. this day aims to commemorate the first and only visit of the Father of the Nation, Mahatma Gandhi, to the studio of All India Radio, Delhi in 1947.

World Pneumonia Day is observed on 12th November every year across the world. the main purpose of this day is to raise awareness, promote prevention and treatment and produce action to combat the disease.

Every year, Ayurveda Day is observed on the day of Dhanwantri Jayanti since 2016. Dhanvantari is the Hindu god of medicine. In 2021, India has celebrated the 6th National Ayurveda Day on 02 November 2021.