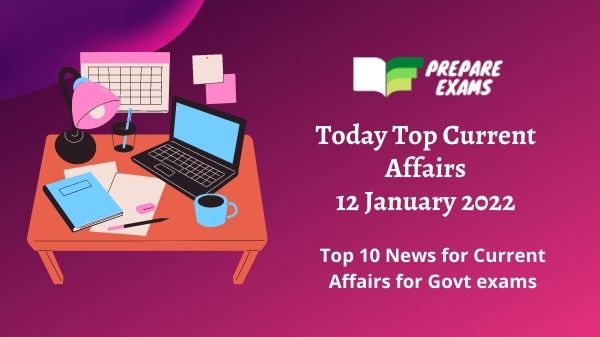 The 19th Meeting of the National Tiger Conservation Authority (NTCA) was conducted on January 05, 2022, and the meeting was chaired by Union Minister for Environment, Forest & Climate Change Shri Bhupender Yadav.

The Railway Protection Force (RPF) of the Western Railways zone of Indian Railways has launched Mission Amanat. under the Mission Amanat, railway passengers will be able to track their lost belongings easier.

How will Mission Amanat help?

Bajrangi Bhaijaan’s Harshaali Malhotra has been honoured with the prestigious Bharat Ratna Dr Ambedkar Award for her performance in the 2015 film, Bajrangi Bhaijaan on January 9, 2022.

South Africa all-rounder Chris Morris has announced to take his retirement from all forms of cricket. The 34-year-old cricketer has played four Tests, 42 ODIs and 23 T20 Internationals, picking up 48 and 34 wickets respectively.

European Parliament President David Sassoli has passed away at the age of 65 on January 11, 2021

The day of 12th January is observed as National Youth Day by the Indian citizens, this marks the Swami Vivekananda Birth Anniversary. it is also known as Rashtriya Yuva Diwas.