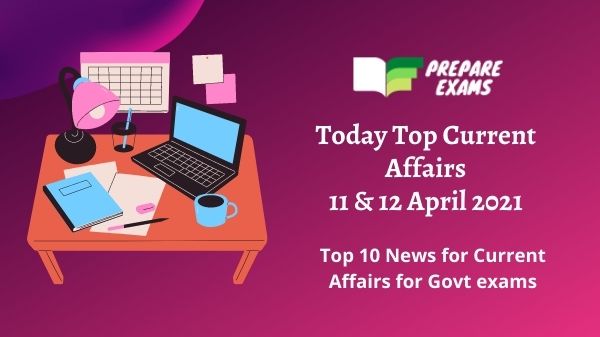 On 9th April 2021, NITI Aayog has launched the first-of-its-kind Online Dispute Resolution (ODR) handbook in association with Agami and Omidyar Network India and with the support of ICICI Bank, Ashoka Innovators for the Public, Trilegal, Dalberg, Dvara, NIPFP

The Centre has launched a mass vaccination programme named “Teeka Utsav (vaccine festival)”. it aims to control surging COVID-19 cases across the country.

On 10th April 2021, The Indian Council for Cultural Relations (ICCR) has observed its 71st Foundation Day and also launched an app named ‘Little Guru’ on this occasion.

66-year-old Ouhoumoudou Mahamadou has been appointed as the new Prime Minister by Niger President Mohamed Bazoum.

On 10th April 2021, Sports Minister Kiren Rijiju has started off the Khelo India State Centre of Excellence (KISCE) for rowing at the Jammu and Kashmir Sports Council Water Sports Academy in Srinagar.

The Noted Punjabi actor Satish Kaul has passed away at the age of 74. he was suffering from COVID-19 related complications.

The day of 11th April is observed as National Safe Motherhood Day and it aims to create awareness about adequate access to care for women during pregnancy, childbirth and postnatal services.

World Parkinson’s Day is observed on 11th April every year across the world. it aims to create awareness of Parkinson’s disease, which is a progressive nervous system disorder.

The day of 12th April is observed as International Day of Human Space Flight every year across the world.