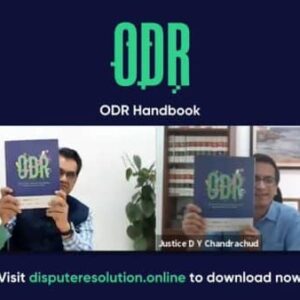 On 9th April 2021, NITI Aayog has launched the first-of-its-kind Online Dispute Resolution (ODR) handbook in association with Agami and Omidyar Network India and with the support of ICICI Bank, Ashoka Innovators for the Public, Trilegal, Dalberg, Dvara, NIPFP

“The ODR handbook helps us identify three things. First, Problem with status quo; Second, how ODR can resolve the challenge; third, how this is the right time for this mechanism. ODR has the potential to make dispute resolution more amicable, affordable and accessible.”

The ODR handbook recognizes why Online Dispute Resolution can be beneficial for the expansion of the #economy, for businesses looking for quick and efficient resolution & even for individuals: Justice DY Chandrachud at the launch, today.