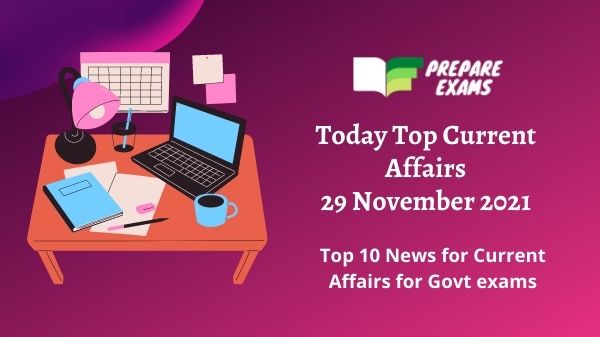 On 26th November 2021, the Reserve Bank of India (RBI) has imposed a monetary penalty of Rs 1 crore on the State Bank of India (SBI) or violating subsection (2) of section 19 of the Banking Regulation Act, 1949.

Niti Aayog has released the 1st ever Multi-dimensional Poverty Index (MPI). the index measures poverty at the national, State/UT, and district levels.

On 25th November 2021, The Indian Navy has commissioned the 4th Scorpene-class submarine INS Vela at the Naval Dockyard in Mumbai, Maharashtra.

Praveen Sinha has been selected as ‘Delegate for Asia’ on the executive committee of the International Criminal Police Organization (Interpol). Praveen Sinha is a Central Bureau of Investigation (CBI) Special Director.

The president of Czech Milos Zeman has appointed the leader of a centre-right alliance, Petr Fiala, as prime minister on November 28, 2021. Petr Fiala will take place of Andrej Babis.

62 years old and Noted mountaineer Harshwanti Bisht has been appointed as the first woman president of the Indian Mountaineering Foundation (IMF).

Sahitya Akademi Award-winning Indian poet of Assamese literature Sananta Tanty has taken his last breath at the age of 69 due to a prolonged illness.

How will Cyber Tehsil Help?

International Day of Solidarity with the Palestinian People 2021

Every year, the International Day of Solidarity with the Palestinian People is observed on 29th November. the main purpose of this day is to educate people on the question of Palestine and support a peaceful settlement of the Israeli-Palestinian conflict.

This day is an UN-organized day and is celebrated every year.