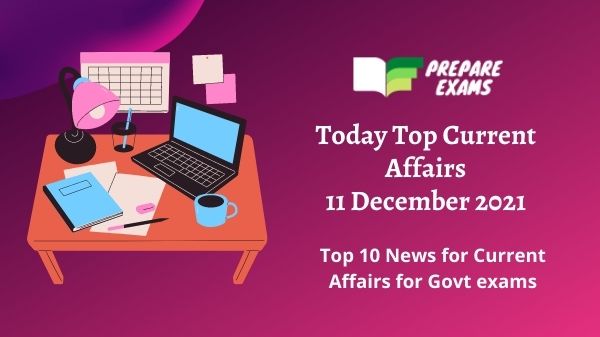 Union Minister of State for Education, Dr Subhas Sarkar has informed that the government is all set to launch Bhasha Sangam mobile app during a Parliament session.

The week-long celebration will have various events: they are

The Union Cabinet has given its approval for the funding and implementation of the Ken-Betwa inter-linking of rivers project with a total cost of Rs 44,605 crore. the project will have a deadline of eight years.

The UP Cabinet has given its approval to a new scheme named “Atma Nirbhar Krishak Integrated Development Scheme”. the main purpose of the scheme is to boost the agriculture sector, and it will be implemented from the current financial year.

NASA has announced the 10 new astronauts to represent the US and work for NASA’s future missions. such astronauts were selected from over 12,000 applicants.

Who is Anil Menon

SBI signs an MoU with Kendriya Sainik Board

State Bank of India (SBI) has signed a memorandum of understanding (MoU) with the Kendriya Sainik Board in order to support and educate the children of war veterans, ex-servicemen, and war widows.

About State Bank of India (SBI)

What is the scheduled bank status

At Home In The Universe autobiography by Bala Krishna Madhur

R.C. Sinha, IAS (Rtd), advisor to the Ministry of Road Development in Mumbai, Maharashtra has released an autobiography titled ‘At Home In The Universe’. the autobiography is authored by Bala Krishna Madhur.

DRDO has successfully test-fired the air version of the BrahMos supersonic cruise missile. the test was conducted from the integrated test range of Chandipur, off the coast of Odisha.

One of the executive directors of Serum Institute of India Dr Suresh Jadhav has passed away at the age of 72 due to renal failure and related complications. he was admitted to Sahyadri Hospital.

Every year, Human Rights Day is observed on 10th December across the world to honour the day in 1948 when the United Nations General Assembly (UNGA) adopted the Universal Declaration of Human Rights (UDHR).