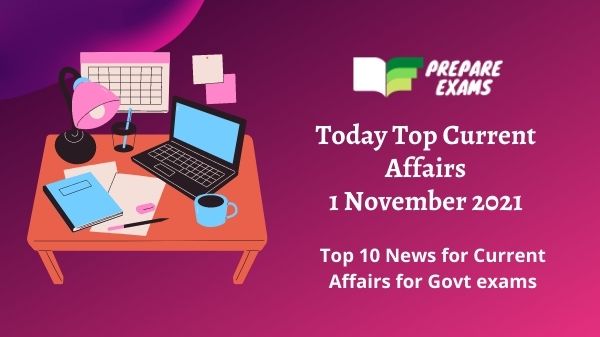 On 31st October 2021, Union Minister of Cooperation Shri Amit Shah has launched the “Dairy Sahakar” scheme at Anand, Gujarat, On the occasion of the 75th Foundation Year of Amul, a function was conducted by Amul

The Chennai-Mysore-Chennai Shatabdi Express has received Integrated Management Systems (IMS) certification, with this, it has become the first train of Southern Railway to do this.

Indian govt has decided to appoint former Supreme Court Judge Justice Ashok Bhushan as the new Chairperson of the National Company Law Appellate Tribunal (NCLAT). he will serve for a period of four years or until he attains the age of 70 years

Every year, World Vegan Day is observed on 1st November by the vegan community. it marks the custom of embracing an all-green diet that excludes dairy and animal products.

Every year, World Cities Day is observed on 31st October in the world. the main purpose of this is to promote the international community’s interest in global urbanization, cooperation among countries in addressing challenges of urbanization, and contributing to sustainable urban development around the world.

Every year, World Thrift Day is celebrated on 31st October across the globe. the main purpose of this day is to promote the importance of savings.