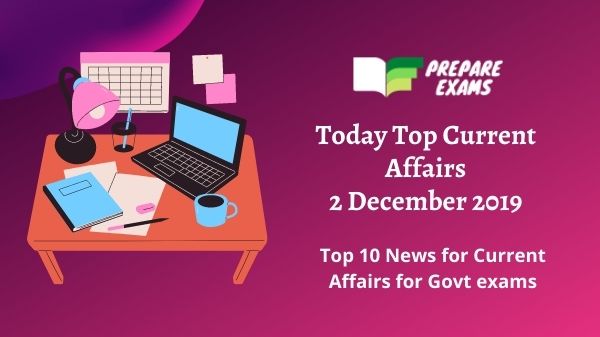 On every 1 Dec, people celebrate as World AIDS Day since 1988. it aims to give support globally to stop new HIV infections. in addition, is to boost awareness and knowledge about HIV.

International Day for the Abolition of Slavery

The day of every 2 Dec, people observes as United Nations’ (UN) International Day for the Abolition of Slavery. the main objective is to spread awareness about atrocities of modern slavery.

Sweden country king Carl XVI Gustaf and Queen Silvia, reached in india for their 5-Days visit. this was his 3rd visiting of india. previsouly, he came in india in 1993 and 2005.

India has registered its name as 1st country in world with making the entire process of hajj fully digital for pilgrims.

The Konark Festival has been begun in the backdrop of the Sun Temple and International SandArt Festival at Chandrabhagabeach. Odisha Governor Ganeshi Lal started the festival with lightening a lamp. the festival will run for 5 Days in state.

First time ever in history, on the occassion of remind of Anniversary of Mahatma Gandhi, there is a openinng of a Multi Media Exhibition at World War II museum, Kisama in Nagaland.

Saudi Arabia have got the G20 Presidency from Japan. now, Saudi is going to host world leaders for a global summit in next year between 21 Nov and 22 Nov 2020.

Soma Roy Burman as next Controller General of Accounts

Soma Roy Burman has selected as next Controller General of Accounts (CGA).

The world champion Lewis Hamilton has won the AbuDhabi Grand Prix 2019. he is 6th world champion. this is his 11th win in 2019 year. and 84th wins in career.