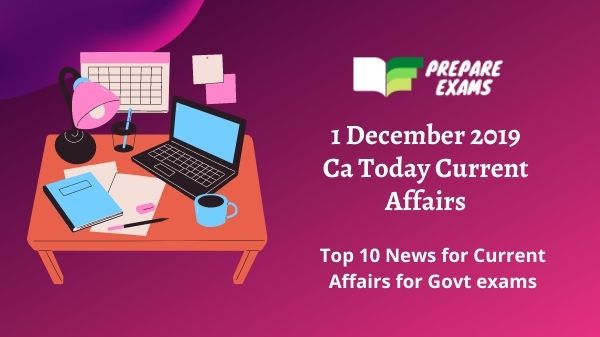 from 2021, Hallmarking is to be mandatory for jewellery

The Consumer Affairs Minister Ram Vilas Paswan stated that Hallmarking for gold jewellery and its artefacts will be mandatory in india from 15 January 2021.

The Labour and Employment Minister Santosh Kumar Gangwar has taken a step to begin Pension Week.

The 40th edition of Conference of UNESCO General was happened in Paris, France. the Conference helds after 2 years.

in terms of missions, China left US behind in global diplomatic heft, but, India at 12th

On based og report of Lowy Institute, now, China is having 276 diplomatic posts globally, which is 3 more than US posts.

Vijaya Bank and Dena bank, out from 2nd schedule of RBI Act

The Reserve Bank of India has got Vijaya Bank and Dena Bank out from the second schedule of the RBI Act.

Today Top Current Affairs 1 December 2019: The Prime Minister of Iraq country Adel Abdul Mahdi has given his resignation letter from post to parliament.

Today Top Current Affairs 1 December 2019: Very famous rock climber from Us Brad Gobright has taken his last breath at the age of 31.