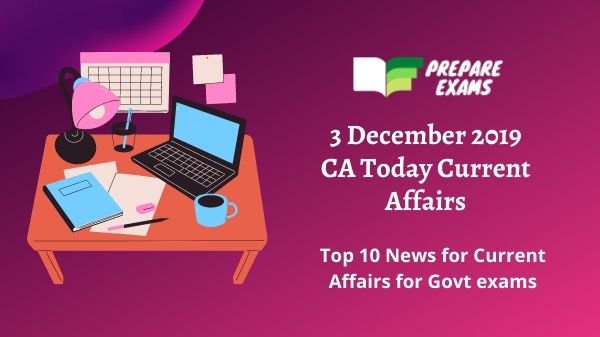 Every year the day of 2nd Dec is being celebrated as World Computer Literacy Day.

International Day of Persons with Disabilities

On every 3rd Dec of year, people like to observe the day as International Day of Persons with Disabilities. the main objective is to increase awareness about the rights and well-being of persons with disabilities.

As per report of CAG, Railways’ operating ratio having worst in last on decade

According to the report of CAG, Railways acheived the worst ever operating ratio of 98.44% in year 2017-18.

The Global Migration Film Festival known as GMFF, was helded in Dhaka, Bangladesh. during festival , over 15 films screened its theme of migration and its various aspects

Due to age fraud, the Board of Control of Cricket in India’s (BCCI) bans cricketer of Delhi Prince Ram Niwas Yadav for the period of 2 years.

in the Senior Wrestling National Championship, Vinesh Phogat and Sakshi Malik have obtained the gold medal defeating Anju and Radhika in the 55kg and 62 kg category respectively. The tournament took place in Jalandhar, Punjab.

The Logo of 3rd Khelo India Youth Games 2020, has revealed in Guwahati. the CM of Assam Sarbanada Sonowal shared logo with Kiren Rijiju.

Mr Hari Mohan has hold the charge as Chairman, Ordnance Factory Board (OFB). he will start serving as Chairman from 1 Dec.

The Asian Development Bank chosen Masatsugu Asakawa as 10th president. he will give his services as president from January 16, 2020.

The English author Tony Joseph has been awarded with 12th ‘Shakti Bhatt First Book Prize. he got prize for his book 2018 Early Indians.

The Hollywood actress Shelley Morrison has died due to heart failure at the age of 83.

the ex-minister of Maharashtra state Tukaram Dighole has died due to brief illness at the age of 77.

At the age of 101, the Ex MP and freedom fighter, has taken his last breath. he was suffering with age-related illness.