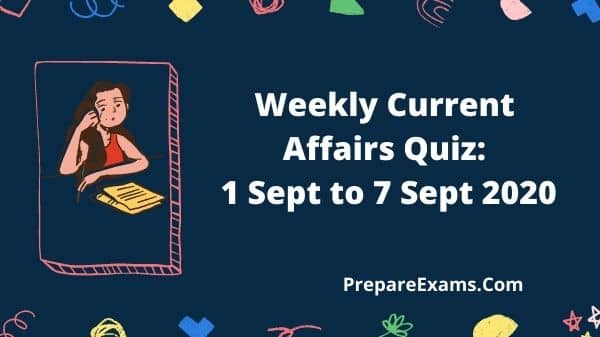 Weekly Current Affairs Quiz 2020: This Current Affairs quiz is going to be helpful for competitive exam and it will help to revise yourself. we have discussed important topics such as new Mission Karmayogi, Global Innovation Index 2020 and Agriota platform and made some questions on such topics. aspirants time to start practising right now.

Q.1 In which year, Late Pranab Mukherjee was awarded with Bharat Ratna award?

Pranab Mukherjee, he was known as ‘Pranab Da’. he served as Indian president from 2012 to 2017. in the year 2019, he was honoured with Bharat Ratna award.

Q.2 How much amount will be given to India by Japan as development assistance loan?

Q.3 Name of the City/State that gets World’s largest solar tree?

Recently, The CSIR-CMERI has established the largest solar tree of the world in Durgapur, West Bengal and it will generate 11.5 kWp electricity.

Q.5 According to the global innovation index 2020, India is holding which position?

India has moved to 48th spot from 52th in the global innovation index. this happens the first time when India has joined in the group of top 50 countries.

Q.6 Gandagi Bharat Chhodo campaign is related to which state?

The Madhya Pradesh State has started off a 15-day long campaign titled ‘Gandagi Bharat Chhodo’. as per campaign, awareness programmes were run in 7178 settlements and apart from this, over 30 lakh citizens became the part of this campaign.

Q.7 CIL is looking for getting the target of one billion tonnes (BT) coal production by which year?

Coal India Ltd (CIL) has taken a decision to invest over 1.22 lakh crore rupees and this money will spent on 500 projects . more over, the investment targets to acheive one billion tonnes (BT) coal production by the year 2023-24 and it helps in making India Aatmanirbhar (self-reliant) in terms of Coal.

Q.8 I Rakhwali app is related to which state?

A) Rajasthan
B) Punjab
C) UP
D) Kerala

On 3rd September 2020, The State Minister of Punjab Preservation Shri Sadhu Singh Dharmsot has begun an app named I Rakhwali. I Rakhwali app has been introduced to make citizens safeguard the forest across the state. the App will play a role in being Greenery Saviours.

As per 4th edition of the Business Reform Action Plan (BRAP) ranking of states for 2018-19, Andhra Pradesh state has got the first place. the BRAP ranking is also called as The Ease of Doing Business rankings.