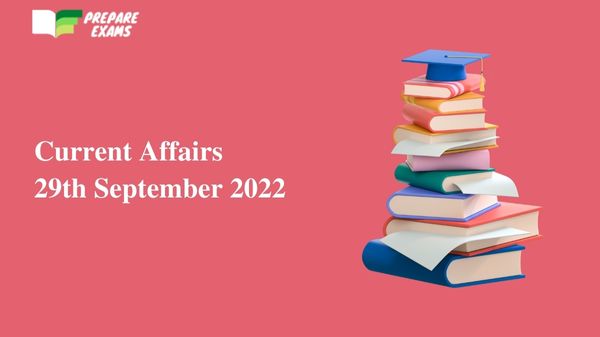 Uttar Pradesh cabinet gives a green signal for the development of the first tiger reserve in the Bundelkhand region in order to promote tiger conservation in the state. The cabinet meeting was chaired by Uttar Pradesh Chief Minister Yogi Adityanath. the cabinet approved notifying Ranipur Tiger Reserve under the Wildlife Protection Act, 1972.

Centre for Development of Telematics (C-DOT) have signed a Memorandum of Understanding (MoU) for cooperation in various areas of Telecom spanning IoT/M2M, AI/ML, Cyber Security and 5G & Beyond Technologies.

The International Civil Aviation Organization (ICAO) and International Solar Alliance (ISA) signed a Memorandum of Understanding (MoU) to check the growth of CO2 emissions in the sector. The MoU aims to ensure the lowering of carbon emissions and is to act as fiduciary responsible holders for the next generation, creating an environment that is sustainable for generations to come.

Noted playback singers Kumar Sanu and Shailendra Singh and music-composer duo Anand-Milind have been awarded the National Lata Mangeshkar Award for different years, were honoured on Wednesday (September 28th, 2022), the birth anniversary of the late legendary singer, at her birthplace Indore.

The Ministry of Defense has appointed Lt General Anil Chauhan (Retired) as the next Chief of Defence Staff (CDS). Chauhan will also serve as Secretary to the Government of India in the Department of Military Affairs.

Global payments and technology company Mastercard will launch the Carbon Calculator feature with Indian banks for offering consumers an estimated carbon footprint for each of their purchases.

Yes, Bank and UCO Bank partnered with two Russian banks for making Payments between India and Russia. Through this partnership, India will come closer to conducting business with Russia with the help of both of these institutions.

Samsung India and Axis Bank have partnered to launch a Visa-powered credit card called Samsung Axis Bank credit card, which will offer 10% cash back on every Samsung product purchased and service used. users also can claim 10% cashback on top of existing offers.

Chennai-based Yubi, formerly CredAvenue has partnered with the country’s largest lender State Bank of India (SBI), to help grow the bank’s co-lending portfolio. Yubi Co.Lend will be integrated with SBI to provide an end-to-end solution and enables lenders to collaborate with multiple partners with a quick one-time application programming interface (API) integration under the partnership.

The Indian Naval Ship Sunayna participated in the capacity-building exercise Operation Southern Readiness conducted by Combined Maritime Forces (CMF) at Seychelles which was held between 24th September and 27th September 2022.

Muthoot Finance UAE-based Lulu International Exchange have signed an MoU driving convenience and easing of money transfer for over 4 lakh NRIs in UAE whose relatives have availed gold loans back home.

Amazon India launched ‘AmazeWIT Circles’, a dedicated networking virtual event in order to educate women and prepare them for careers in technology. The ‘AmazeWIT Circles’ has been designed for seasoned software development engineers.

Every year, World Rabies Day is celebrated on September 28 as a tribute to Louis Pasteur – the inventor of the first effective rabies vaccine in the world. it aims to promote the fight against Rabies, raise awareness of its prevention, and celebrate the achievements the world has made against this deadly disease.