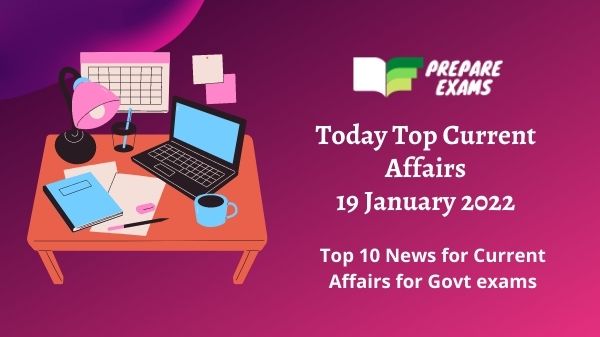 Union Health Minister Mansukh Mandaviya has launched a commemorative postal stamp on the Covid-19 vaccination on January 16, 2022, in order to mark one year of the Covid inoculation drive.

The 9th Women National Ice Hockey Championship 2022 was inaugurated by Chief Minister Jai Ram Thakur at an altitude of 12,000 feet, at the Ice Skating Rink, Kaza, in Lahaul-Spiti district of Himachal Pradesh.

Reliance Jio becomes the first telecom company to launch a UPI autopay facility for both prepaid and postpaid subscribers in collaboration with the National Payments Corporation of India (NPCI).

Narendra Kumar Goenka has assumed the charge as the new chairman of the Apparel Export Promotion Council (AEPC) with effect from January 17, 2022.

On 17th January 2022, The Best FIFA Football Awards 2021 ceremony was held in Zurich to honour players for excellent achievement in football.

Celebrated cartoonist Narayan Debnath has passed away at the age of 97. he was suffering from a prolonged illness.