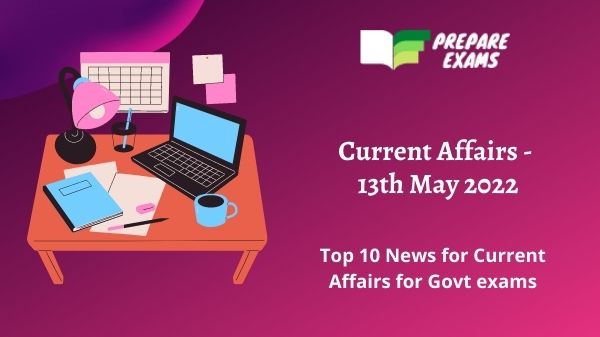 The Indian government has released an amount of Rs 7,183.42 crore as a revenue deficit grant to 14 states as per the recommendations of the 15th Finance Commission. The Department of Expenditure, Ministry of Finance released the 2nd monthly instalment of the Post Devolution Revenue Deficit (PDRD) grant to states.

West Bengal Chief Minister, Mamata Banerjee has received the Bangla Academy Award for her “relentless literary pursuit” at a function organised by the government’s information and culture department on the occasion of Rabindranath Tagore’s birth anniversary.

India has been appointed as the new Chair of the Association of Asian Election Authorities (AAEA) for 2022-2024. India was elected unanimously at the meeting of the Executive Board and General Assembly in Manila, Philippines.

Sri Lanka’s prime minister resigned from the post after weeks of protests and sent his resignation letter to the president of Sri Lanka Gotabaya Rajapaksa.

A Russian chess grandmaster Yuri Averbakh passed away at the age of 100 in Moscow. He was among the world’s best players for a decade, trained world champions and was the last surviving participant in one of the greatest competitions in history.

Veteran Congress leader and former Union minister Pandit Sukh Ram passed away at 94, he was admitted to the All India Institute of Medical Sciences (AIIMS) in New Delhi.

Every year, the International Day of Plant Health (IDPH) is observed on May 12th by The United Nations in order to boost global awareness of how protecting plant health can help end hunger, reduce poverty, protect biodiversity and the environment, and boost economic development.

Every year,  International Nurses’ Day is observed on May 12 across the world to honour the services of nurses. it aims to mark the contributions and hard work of nursing staff around the world.