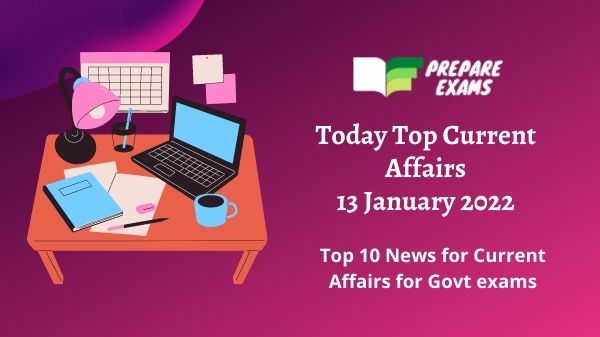 Swiss brokerage UBS Securities has downgraded the growth forecast of the Indian economy for the current financial year (FY22) to 9.1 per cent. due to a massive surge in Omicron infections.

Henley Passport Index has been released and as per the Index, India’s passport has improved in rankings this quarter compared to 2021 to 83rd position from 90th rank last year and has visa-free access to 60 destinations worldwide in Q1 2022, as compared to 58 destinations in Q4 of 2021.

Tata Group to replace Vivo as IPL title sponsors from 2022

Tata Group is going to Chinese mobile manufacturer, Vivo as the title sponsor of the Indian Premier League from 2022. the information has been shared by league chairman Brijesh Patel and has been discussed Tata Group’s association as title sponsors of IPL during the league’s Governing Council meeting.

New Zealand cricketer Ajaz Patel has received the ICC Player of the Month award for December for his stupendous 10-wicket haul against Virat Kohli.