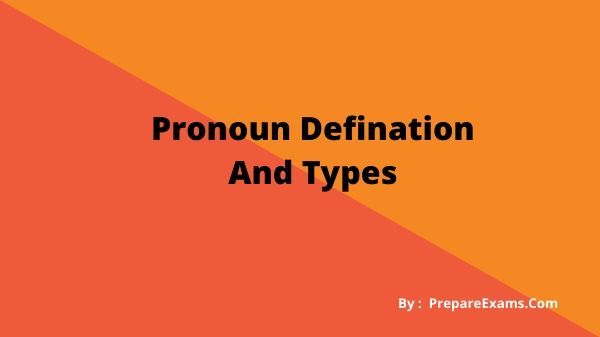 A word, is known Pronoun that changes a noun in sentences. in many sentences we see that Noun are used again and again . to avoid this sitution we use pronoun instead of noun.

Pronoun Has Eight Types. they are

And We are also some Pronouns as Object  in sentence.

We can see The Use of Pronouns as Subject For example :

We can see The Use of Pronouns as Object For example :

Mine
Ours
yours
hers
his
theirs

Rule 1) -> In this rule , we will use pronoun according to noun. For Example

Rule 4 ) -> If we are expressing time , weather , temprature And Distance in that case We will use  it . in this condition, It has no meaning. For Eg.

2. Demonstrative Pronouns :  Pronouns That are used to signalize Persons and Things like – this , that , these , those , such

Rule 5) -> Use That Of And Those Of to Stop Repetition. Here That of is a Singular And Those Of Works as Plural . For Eg.

3. Distributive Pronouns :  Either , Neither , Each

Rule 7) -> Only For Two . Either is used as Positive And Neither is Negative.

4. Reciprocal Pronoun :  Each Other , One Another

5. Reflexive Pronoun :  myself , yourself , himself , themselves , herself

Rule 10 ) ->  If The Verbs (Absents, Lay, Satisfy , Introduce hurt,cheat , Prostrate , Revenge , avail , enjoy , pride , resign , enjoy , overreach )are being Used then , we will use a Object Or reflexive Pronoun After Verb.

6. Interrogative  Pronoun : is used when we are Questioning To others . Who , Whom , Whose , Which  are Used To ask Question .

For Example – By Whom Was Book Written ?

If We Use Preposition at end of sentences then , Who is used as starter

For Example – Who was Book Written By ?

Rule 17) -> Anybody , Everybody , somebody ,nobody + masculine Singluar Pronoun as far as gender is not feminine For Example

For Example – One should care one’s life.

For example – amit has a friend whom he trusts

Rule 20) -> We use the relative Pronoun (Who, Which , That ) as a subject Of sub -ordinate clause

For example – amit who Comes here is very intelligent

Rule 21) -> If the two antecedent is used by joining and then one person and another animal or the object then use Relative Pronoun “that”  after that.

For example – The man and his cow that i saw have been kidnapped.

Rule 22) -> After None,Nobody , nothing , same ,somthing , all , the only , the little , the few or any Superlative Degree (The Best / the highest ), That will come in place of Who/Which.