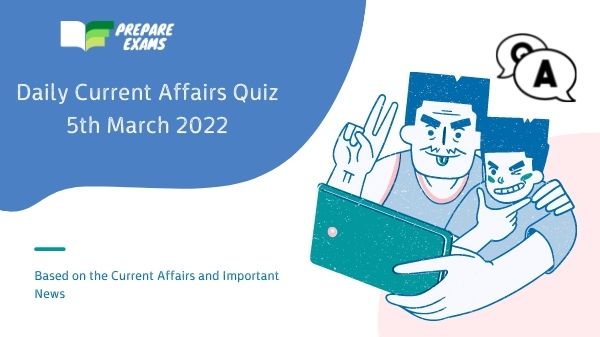 2) Which was awarded the ‘Special Jury Award’ at the 9th edition of FICCI Water Awards?

The National Mission for Clean Ganga (NMCG ) has been awarded the ‘Special Jury Award’ at the 7th India Industry Water Conclave and 9th edition of FICCI Water Awards, which was held virtually, between 2nd and 3rd March 2022.

3) Where was the DefExpo 2022 to be scheduled to take place?

4) When is World Obesity Day observed?

Every year, World obesity day is observed on 4th March across the world. it aims to make people aware of the problem of obesity so that they can take steps to end it.

5) Who is appointed as the new CEO of the airline company Jet Airways?

Jet Airways has appointed Sanjiv Kapoor as the Chief Executive Officer (CEO) and his appointment will come into effect from April 4th, 2022. He will lead Jet Airways and make it become the most preferred full-service carrier of India.

6) Aman Lekhi resigned from the post of ——– of India

7) Cricket legend Shane Warne has passed away at 52, He played for which country?

Correct Answer is: B

Former Australian cricketer and the greatest leg-spinner in the history of the Cricket Shane Warne has passed away on 4th March 2022 at the age of 52.

8) Which country is hosting the 2022 ICC Women’s Cricket World Cup?

The 12th edition of the ICC Women’s Cricket World Cup is being conducted in New Zealand from March 04 to April 03, 2022.