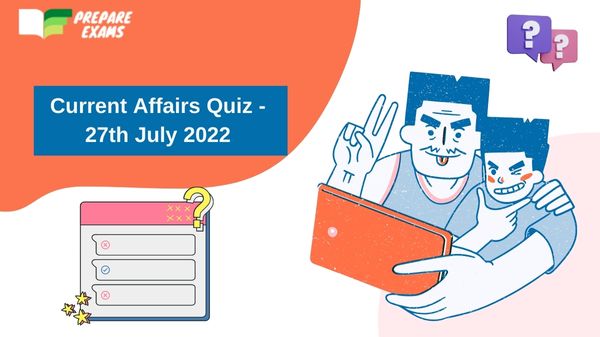 1)Who has been appointed as the new Albania’s President?

2) GoI Designates 5 New Ramsar Sites, Karikili Bird Sanctuary is one of them, where is it located?

3) Who is elected As CEO Of Paytm Payments Services?

Explanation: Paytm’s parent One97 Communications has announced the appointment of Nakul Jain as the CEO of Paytm Payments Services Ltd (PPSL). Nakul Jain will replace Praveen Sharma, who is now serving as the acting CEO of PPSL, and has been posted to oversee the organisation’s commerce vertical in addition to his other duties.

4) When is International Day for the Conservation of the Mangrove Ecosystem celebrated?

Explanation: Every year, International Day for the Conservation of the Mangrove Ecosystem is observed on July 26th across the world to raise awareness of the importance of mangrove ecosystems as “a unique, special and vulnerable ecosystem” and it also promotes solutions for their sustainable management, conservation, and uses. this day is also known as World Mangrove Day.

Explanation: The Hartsfield-Jackson Atlanta International Airport (ATL) has been ranked as the busiest airport in the world with 103 million passengers (both departing and arriving).

6) In which city, the 44th Chess Olympiad will be held?

Explanation: India will host the 44th edition of the Chess Olympiad at Mamallapuram, Chennai and will be held from July 28 to August 10. it will be the world’s biggest chess event. 188 teams from 187 countries will participate in the Open section and 162 in the Women’s section. The official logo and mascot of the Olympiad is a chess knight called Thambi (which means Younger brother in Tamil).