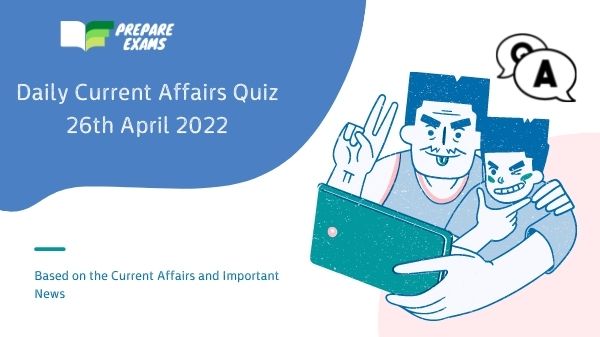 1) Which country is designated as the Guest of Honour Country at the Paris Book Festival 2022?

2) Elon Musk is set to acquire which social media platform for $44 billion?

3) Name of the NITI Aayog Vice-Chairman who has resigned from the post?

4) Who is appointed as New NITI Aayog Vice-Chairman?

5) Who is elected as UNICEF’s YuWaah board co-chair?

7) When is the International Day of Multilateralism and Diplomacy for Peace observed?

8) On which date, International Chernobyl Disaster Remembrance Day is observed?

9) When is International Delegates Day observed?

Solution 1 – Correct Answer is: A

Explanations: The world’s richest man Elon Musk has taken control of Twitter for approximately $44 billion with shares valued at $54.20. Musk had announced his takeover bid on April 14th, 2022.

Solution 4 – Correct Answer is: A

Solution 5 – Correct Answer is: B

Explanations: UNICEF’s YuWaah’ – the Indian chapter of Generation Unlimited has announced the CEO of Capgemini in India Ashwin Yardi as its co-chair and will be a co-chair along with Yasumasa Kimura, the UNICEF Representative.

Solution 6 – Correct Answer is: B

Explanations: Ukrainian President Volodymyr Zelenskyy has been named for his valour to protect the Ukrainian people during the Russia-Ukraine Conflict.

Solution 7 – Correct Answer is: B

Explanations: Every year, the International Day of Multilateralism and Diplomacy for Peace is observed on April 24 across the world.

Solution 8 – Correct Answer is: A

Explanations: Every year, The International Chernobyl Disaster Remembrance Day is observed on April 26th across the world.

Explanations: Every year, International Delegate’s Day is observed on April 25th across the world. it aims to create awareness of the function of Member States‘ representatives and delegates at the United Nations.

Solution 10 – Correct Answer is: B

Explanations: Every year, World Intellectual Property Day is observed on April 26 in order to create awareness about the importance of intellectual property (IP) rights in fostering innovation and creativity.