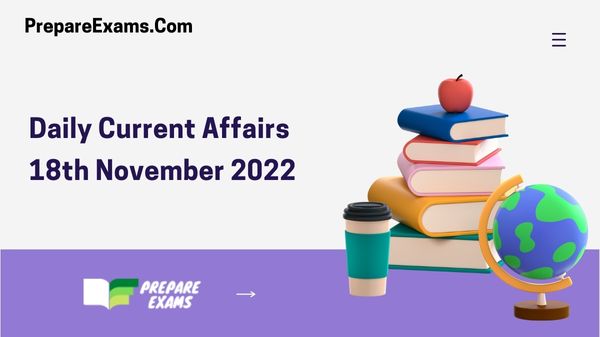 As per the report released by Knight Frank, Indian cities such as Hyderabad, Chennai, and New Delhi, have emerged as three of the top data centre markets in the Asia-Pacific (APAC) region. the report shows that the data centre industry in India has been on a high growth trajectory, partly compelled by government policies, including easier access to credit and other incentives for the purpose of boosting data centre investment.

Indonesia handed over the G20 presidency to India for the coming year at the Bali summit on 16 November 2022. Prime Minister Narendra Modi presented gifts to world leaders highlighting India’s culture and arts. Indonesian President Joko Widodo handed over the G20 presidency to Prime Minister Modi at the conclusion of the two-day G20 Summit in Bali.

Former bureaucrat C V Ananda Bose has been elected as the Governor of West Bengal. His appointment will take effect on the date he assumes charge of his office. C V Ananda Bose is a 1977 batch (retired) Indian Administrative Service (IAS) officer of the Kerala cadre. He served as an administrator in the National Museum here before superannuating in 2011.

The Government of Tamil Nadu is planning to implement the Tamil Nadu Biodiversity Conservation and Green Climate Change Response Project in collaboration with a Japanese Multinational Cooperative Organization at a cost of 920 crores 56 lakh rupees (920,56,00,000).

The Rajasthan government has approved an outlay of Rs 2.60 crore for the Camel Conservation Scheme, aimed at protecting camels. Under the Rajasthan Camel Conservation Scheme, each female camel and calf will be classified by the veterinary doctor and an identity card will be allocated. The camel rearer will be provided Rs 5,000 and the veterinarian will be given Rs 50 honorarium for each identity card. On completion of one year of the camel calf, the rearer will be provided with another instalment of Rs 5,000.

Union minister for Road, Transport and Highways, Nitin Gadkari inaugurated and laid the foundation stone for three national highway projects worth ₹1,206 crores in Siliguri, West Bengal. The projects include a two-lane ROB in replacement of the level crossing at km 615.5 of NH-31 (Oodlabari).

bridge on the Teesta River

The Uttarakhand cabinet decided to shift the high court from Nainital to Haldwani. The decision was taken in the meeting, chaired by Chief Minister Pushkar Singh Dhami. the govt also made strict amendments to the conversion law, wherein forced conversion will now be a punishable offence with the provision of 10 years of punishment under the new law.

Sandhya Devanathan appointed as the head of Meta in India division

Star Indian paddler Achanta Sharath Kamal becomes the first player from India who has been elected to the Athletes’ Commission of the International Table Tennis Federation (ITTF).

NTPC’s QC Team from Unchahar ABHYUDAYA won the “GOLD” award in the 47th International Convention on Quality Control Circle (ICQCC-2022). The convention was held from 15th-18th November in Jakarta. The theme for ICQCC-2022 is “Built Back Better through Quality Efforts”.