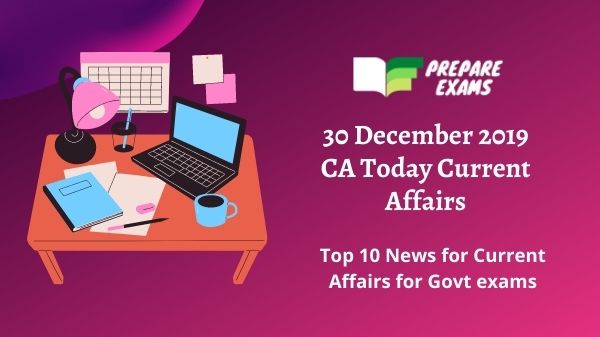 The Prime Minister of Ireland, Leo Varadkar, has reached india during his visit.

To give an education loan subsidy, Assam Government has begun Abhinandan scheme.

The Director General of Police (DGP) of Andhra Pradesh state Gautam Sawang has said that police department will celebrate 2020 as the “year of women safety”.

To increase the transparency in auctioning of assets attached by banks, Finance Minister Nirmala Sitharaman started off a an online platform named as eBkray.

Shadab Jakati has quit all formats of cricket

The spinner from Goa Shadab Jakati, has taken retirement from all formats of cricket.

Mr Ajit Pawar has taken oath as next deputy CM of Maharashtra state. this happened the second time in two months.

as a result, Justice (retired) Deepak Verma has selected as next and new new ombudsman by The AGM of Delhi & District Cricket Association (DDCA).

The President of Algeria Abdelmadjid Tebboune has chosen AbdelazizDjerrad as the new and next PM of Algeria nation.