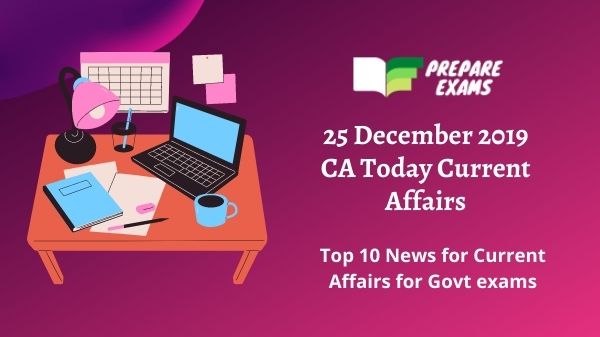 The Union Cabinet will give Rs 6000crore for Atal Jal Yojana

Prakash Javadekar said Digital Radio will be introduced in 2024

Prakash Javadekar, Minister of Information and Broadcasting, has said that centre will bring Digital Radio in 2024 at an annual Akashvani awards function in New Delhi.

Till 31 December, Mandatory to link PAN with Aadhaar Card

The Income Tax Department has released a notification that they said it is mandatory to link your Permanent Account Number (PAN) with Aadhaar Cards by 31 Dec 2019.

K T Rama Rao, Minister for IT and Industries, officially will decide declare 2020 as the Year of AI for Telangana state.

Tamil Nadu at first position in coverage under micro-irrigation

The state Tamil Nadu has been as first state in coverage of area under micro-irrigation (MI) 2019.

PM Modi to visit Brussels for Summit With EU in 2020

PM Narendra Modi is going to Brussels for the next India-EU Summit in 2020.

An Earth observation satellite has sent into space which was jointly developed by China and Brazil.

The Beijing-based Asian Infrastructure Investment Bank (AIIB) has decided to give loan of 210 million dollars. this loan will be for irrigation and solar energy projects in India.