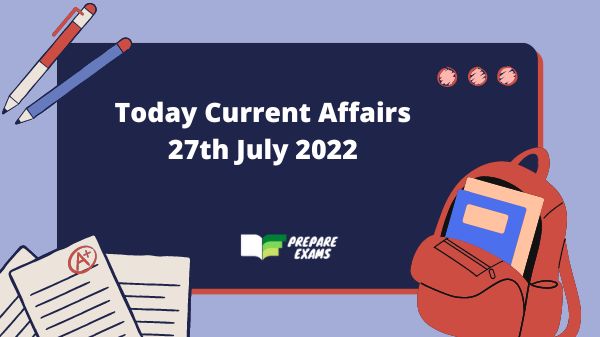 Govt of India has designated five (5) new wetlands of International importance, including three wetlands (Karikili Bird Sanctuary, Pallikaranai Marsh Reserve Forest & Pichavaram Mangrove) in Tamil Nadu, one (Pala wetland) in Mizoram and one wetland (Sakhya Sagar) in Madhya Pradesh, making a total of 54 Ramsar sites in the country. The Ramsar sites are increased from 49 to 54 Ramsar sites. Union Minister of Environment, Forest and Climate Change, Bhupender Yadav said, “Delighted to inform that 5 more Indian wetlands have got Ramsar recognition as wetlands of international importance.”

Paytm’s parent One97 Communications has announced the appointment of Nakul Jain as the CEO of Paytm Payments Services Ltd (PPSL). Nakul Jain will replace Praveen Sharma, who is now serving as the acting CEO of PPSL, and has been posted to oversee the organisation’s commerce vertical in addition to his other duties.

India will host the 44th edition of the Chess Olympiad at Mamallapuram, Chennai and will be held from July 28 to August 10. it will be the world’s biggest chess event. 188 teams from 187 countries will participate in the Open section and 162 in the Women’s section. The official logo and mascot of the Olympiad is a chess knight called Thambi (which means Younger brother in Tamil).

Canara Bank has launched its mobile banking app named “Canara ai1”. The “Canara ai1” banking app aims to act as a one-stop solution with more than 250 features to cater to the banking needs of its customers.

New Delhi’s Indira Gandhi International Airport has been included in the league of the top 20 busiest airports in the world for 2017 in terms of traffic volume. As per the Airports Council International (ACI), The Delhi airport ranked 16th position from 22nd rank in 2016 and the airport’s passenger traffic grew by 14.1% to 63.45 million solidifying its status as one of the fastest-growing airports in the world for passenger traffic.

International Day for the Conservation of the Mangrove Ecosystem 2022

Every year, International Day for the Conservation of the Mangrove Ecosystem is observed on July 26th across the world to raise awareness of the importance of mangrove ecosystems as “a unique, special and vulnerable ecosystem” and it also promotes solutions for their sustainable management, conservation, and uses. this day is also known as World Mangrove Day.