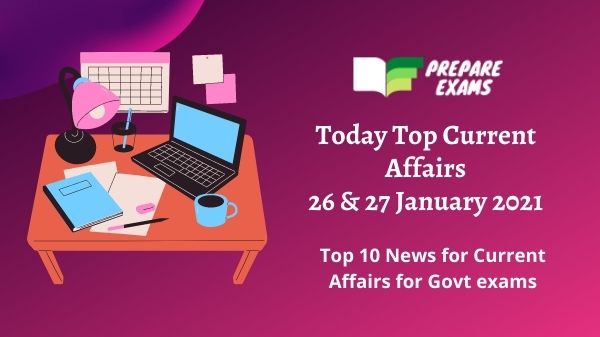 Goa, 24th January 2021: The 51st edition of International Film Festival of India (IFFI) was organized at Shyamaprasad Stadium near Panaji in Goa. the event was conducted through a hybrid mode.

The President of India has distributed Padma awards at ceremonial functions at Rashtrapati Bhawan.

As per the Global Climate Risk Index 2021, Germanwatch has released the top 10 most affected countries by climate change on 25th January 2021. Germanwatch is an NGO based in Bonn, Germany.

On 26th January 2021, International Monetary Fund (IMF) has released an estimation regarding the Indian economy to contract by 8% in the current financial year 2020-21.

IMF Estimations for the global economy

J K Shivan as MD and CEO of Dhanlaxmi Bank

On 26th January 2021, J K Shivan has been appointed as managing director (MD) and CEO of Dhanlaxmi Bank. His appointment was approved by the Board of Directors.

Former India goalkeeper Prasanta Dora has taken his last breath at the age of 44. he played for the big three clubs of Kolkata football. he was suffering from ‘Hemophagocytic lymphohistiocytosis’.