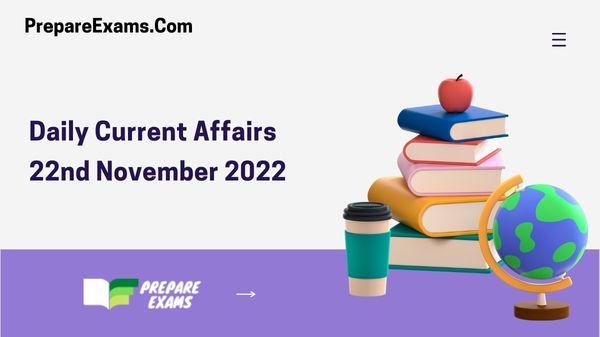 India will chair of the Global Partnership on Artificial Intelligence for 2022-23 at a meeting of the body in Tokyo on November 21st, 2022, the Ministry of Electronics and IT said. India got more than a two-thirds majority of first-preference votes in the election to the Council Chair. While, Canada and the United States of America ranked in the next two best places in the tally.

US-based Portulans Institute, an independent non-profit research and educational institute released Network Readiness Index 2022 report. as per the Network Readiness Index 2022, India has moved up by 6 places to improve its position and rank 61st to 51.19 in 2022 from 49.74 in 2021. The NRI 2022 report classifies a total of 131 economies that together account for almost 95% of the global Gross Domestic Product (GDP).

Former bureaucrat Arun Goel has been appointed as the Election Commissioner. Arun Goel’s appointment was approved by the President with effect from the date he assumes the office.

Prof. Venu Gopal Achanta Elected as a Member of International Committee for Weight and Measures (CIPM)

The Ministry of Education announced 39 schools (including 17 elementary and 22 secondary/ higher secondary schools) from across the country are awarded the Swachh Vidyalaya Puraskar for the 2021-22 academic session. The schools selected from among the total 8.23 lakh entries are 28 government and aided while 11 are private schools.

The 53rd International Film Festival of India is being held in Goa from November 20 to 28, 2022, and aimed at promoting the art of film by providing a unique platform showcasing the best of cinema.

Every year, World Hello Day is celebrated on November 21 across the world to get connected with each other and have peace around them. on this day, people meet friends, family, and relatives and say hello to at least 10 people they meet during the entire day.

Every year, World Fisheries Day is celebrated on November 21st across the world to highlight the critical importance of healthy ocean ecosystems and to ensure sustainable stocks of fisheries in the world. The day also aims to draw attention to overfishing, habitat destruction, and other serious threats to the sustainability of marine and inland resources.