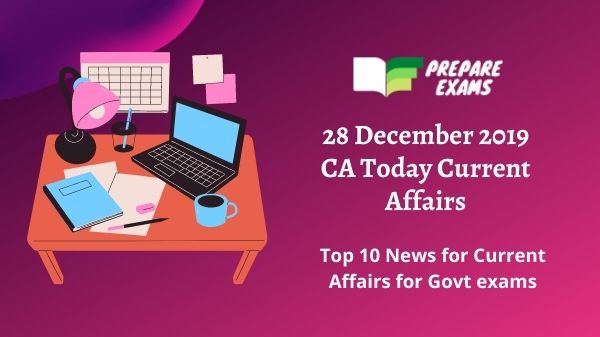 In Kushinagar (UP), 1st university for the transgender community

The first university for transgender community will start in Kushinagar district in Uttar Pradesh state.

In Mandu(Madhya Pradesh), The 1st edition of Mandu Festival has begun.

Russia has deployed its first Avangard Hypersonic glide. The nuclear-capable missiles may travel more than 20 times the speed of sound.

Karnataka Bank has begun KBL Xpress SB Accounts via TAB Banking on the spot. it is an digital initiative.

IMF expects The GDP growth rate of India at 6.1% for FY20

The International Monetary Fund (IMF) has expected that The GDP of India will stay at 6.1% in FY20.

Due to dopping, Weightlifter Seema gets banned for four years duration

the National Anti-Doping Agency (NADA) has put ban on Weightlifter Seema for four years for a doping violation.

At Kingdom of Dreams, Gurugram, Aayushi Dholakia from Vadodra has won the title of Miss Teen International 2019.

A book “Politics of Opportunism”,  released by S Gurumurthy:

The Former Judge Justice of Supreme Court Dr S Mohan has taken his last breath at the age of 89.

Don Imus who is American host of the radio show, has taken his last breath at the age of 79. in 2018, he retired from famous radio show.

The Former BJP president and Rajya Sabha MP of Assam Indramoni Bora has died at the age of 81.