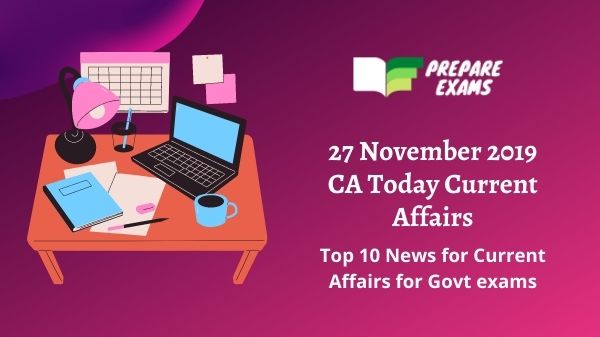 An Agreement between India and Myanmar on human trafficking

The Union Cabinet has accepted the Memorandum of Understanding (MoU) which signed by India and Myanmar to stop humans trafficking.

In LokSabha, a bill was introduced which aimed to merge Union Territories(UT) of Daman and Diu, and Dadra and Nagar Haveli.

1st Vulture Conservation by UP Govt

in order to take a major move for endangered vulture population. The govt of Uttar Pradesh state has decided to establish a new and first vulture conservation and breeding centre in the state.

A logo to Anti-corruption ombudsman Lokpal

Anti-corruption ombudsman Lokpal has revealed its logo and motto. the logo is a symbol of caretaker of people.

Assam applies sanctions on gutkha, pan masala for one year

Due to intrest in public health, The govt of Assam state, has put sanctions on manufacturing, storing, transporting, displaying, distributing and salling of gutkha, pan masala or any chewing material products which contains tobacco or nicotine.

The Mine Countermeasures Exercise(MINEX) 2019, between India and Japan

The Navy of India is participting in bilateral exercise, named as Mine Countermeasure Exercise (MINEX) 2019 with Maritime Self Defence Force of Japan in Kochi, Kerala.

from Satish Dhawan Space Centre., The Indian Space Research Organisation (ISRO) has launched PSLV-C47 which carried Cartosat-3 and other 13 nanosatellites.

The IndiaFirst Life Insurance has made partnership with Spice Money which provides tech-led financial services.

The Asian Development Bank has given approval to release 2nd tranche for increasing capital investment and infrastructure in the west bengal state.

The Cabinet Committee on Economic Affairs (CCEA) has supported in food corporation of India (FCI) capital to Rs 10,000 crore from Rs 3,500 crore.

in 2023, Odisha will be as host for Men’s Hockey World Cup. the world cup match will be organized in Rourkela and Bhubaneswar.

Tamil actor Bala Singh has died in Chennai due to brief illness.

The ex Chief of Navy Admiral Sushil Kumar has taken his last breath at the age of 79.