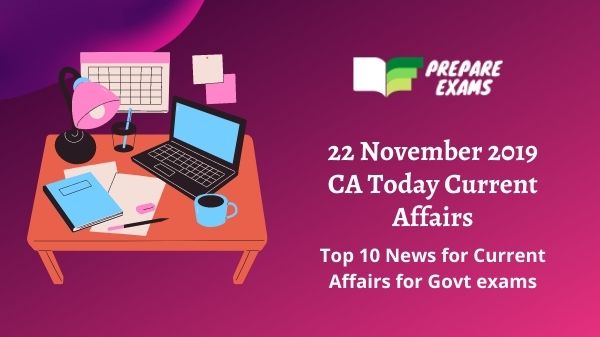 The UNESCO (United Nations Educational, Scientific and cultural organization which celebrates The World Heritage Week between 19 Nov and 25 Nov 2019.

On the occassion of 70 years of diplomatic ties, India and China plans to commemorative stamps, metal coins

India and China are going to issue commemorative stamps and noble metal coins on the occasion of 70th anniversary of diplomatic ties.

The data of Road Accidents in India 2018, by Ministry of Road Transport and Highways

Visa exemption for foreigners who are seeking medical treatment in india

India decides to give exemptions to foreigners who wants to get medical treatment in India. India took decision after implementation of liberalised medical visa policy.

to get aim of boosting air connectivity in Karnataka, the CM BS Yediyurappa made opening of Kalaburagi airport, 14-km away from city.

The Nagoya, a city of Japan, has arranged a 2 days G20 foreign ministers meetings.

Under IBC, over ₹500 crore assets as NBFCs

The run machine Virat Kohli has created a record as a test captain with scoring fastest 5000 runs for india.

on the occasion of World Toilet Day, The Indian govt has give honour to top ranked states, union territories, and districts with Swachh Survekshan Grameen 2019.