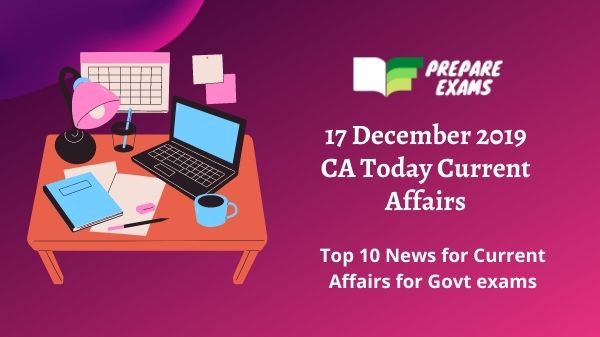 The TRAKEA Forensic Science Laboratory (FSL) Barcoding System (BSS) in Madhuban in Haryana, has been started off by Chief Minister (CM) of Haryana Manohar Lal Khattar.

in New Delhi, The 15th Finance Commission made arrangemens for its fifth meeting of the Economic Advisory Council (EAC)

UNESCO eliminates racist carnival from the list of heritage

When authorities considered the “recurrence of ethnic andanti-Semitic stereotypes” to be inconsistent with its values, the Belgian carnival was removed from the list of UNESCO Intangible Cultural Heritage.

In order to facilitate action and update of different technologies and creative agricultural model, ICAR and NABARD sign MoUs

The Indian Agricultural Research Council (ICAR) has signed the memorandum of understanding (MoU) with the National Board of Agriculture and Rural Development (NABARD).

Ben Stokes as BBC Sports Personality of the Year 2019

The all rounder cricketer of England nation Ben Stokes has chosen as BBC Sports Personality 2019.

Lieutenant General Manoj Mukund Naravane has been chosen as next Chief of the Indian Army.

IAS Ravi Mittal as new I and B Secy

Ravi Mittal who is a AIRIAS officer will work as the new Secretary, Information and Broadcasting Ministry.

Oscar winner American actor Danny Aiello has taken his last breath at the age of 86.