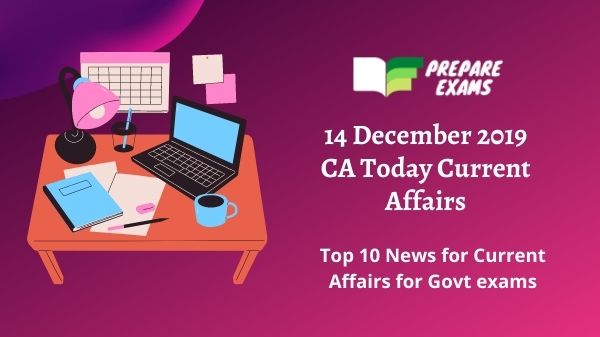 The 3 Days TECH (Transforming Education Conference for Humanity) 2019 is taking place in in Visakhapatnam, Andhra Pradesh.

The Maha Vikas Aghadi (MVA) govt has planned to give name to Nagpur-Mumbai Super Communication Expressway (NMSCE) as name of Balasaheb Thackeray.

In next year March, Orchha festival in MP

The MP state govt is going to host the 3-Days Namaste Orchha festival between 6 March and 8 March in Orchha.

The Chief Minister of Odisha State Naveen Patnaik has given green flag for a special train.

At Headquarters of BPRD, NewDelhi, The Bureau of Police Research and Development has decided to host the 37th National Symposium of Heads of Police Training Institutions

Audible, Amazon-owned has introduced the Audible Suno app in india and made for especially for Indian market.

US as 6th biggest oil supplier to India however, Iraq at top

As per the oil ministry to parliamentary committee data, the United States has obtained 6th place as largest oil supplier to India.

Moody’s estimated The GDP growth of India to 5.6 Percentage for FY2019

The Moody’s Investors Service, has shortened GDP growth of India to 5.6%. and said it will be a slow employment growth weighs on consumption.

World no.1 Ashleigh Barty, nominated for WTA Player of the Year

Ashleigh Barty from Australia, who obtained French Open crown and no. 1 rank. he is nominated for WTA Player of the Year 2019.

Dwayne Bravo is back in Cricket, will play T20 World Cup 2020

The all-rounder of West Indies team Dwayne Bravo has come back after retirement from cricket.

Crystal Award to Deepika Padukon, due to bringing awareness about mental health

The Public Enterprise Selection Board has chosen Shrikant Madhav Vaidya as its new Chairman of Indian Oil Corporation Ltd.

The Ex Algerian prime minister Abdelmadjid Tebboune, has got victory in Algeria’s presidential election. so, he will be next president of Algeria.

The famous actor and writer of Telugu Gollapudi Maruti Rao has taken his last breath at the age of 80. he had given his writings and acting for several decades.