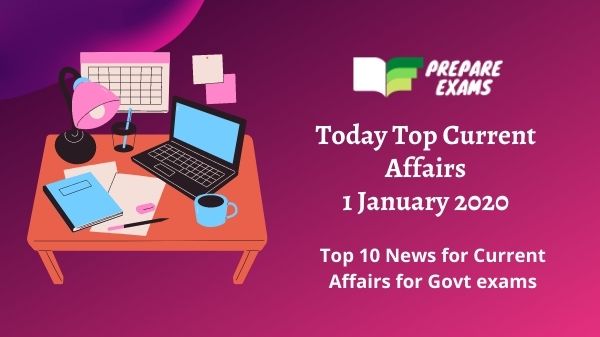 Dear Students, We are providing you Daily Updated Current Affairs about the National and International Issues. Have a look Current Affairs of Today Top Current Affairs 1 January 2020 here and keep yourself updated with Daily news. students those who Want to get a job in IBPS/SBI/PO/Clerk can take help of this and along with it, test Your Level of knowledge with the Current Affairs Quiz.

The government has begun a new a portal, www.ceir.gov.in for subscribers of Delhi-NCR.

The Indian Olympic Association (IOA) has ended its boycott call for the 2022 Commonwealth Games.

Rohan Shah as Governor on ERIA Board

Commerce and Industry Ministry has selected Rohan Shah as India’s Representative and Governor on the board of Economic Research Institute for ASEAN and East Asia (“ERIA”).

the editor-in-chief of ‘Jagran, Sanjay Gupta is going to be honoured with the ‘Lokmanya Tilak National Journalism Award’.

The Former Doordarshan Director-General Shiv Sharma has taken his last breath at the age of 85.

Q.1 What is aim of Global Family Day?

Global Family Day
aims to Unite and Spread message of peace and it is observed on first January of year.

Q.2 Use of www.ceir.gov.in portal?

www.ceir.gov.in portal  aims to facilitate requests for blocking of stolen/lost mobilephones by customers.to get services customers must have the same International Mobile Equipment Identity (IMEI) number.