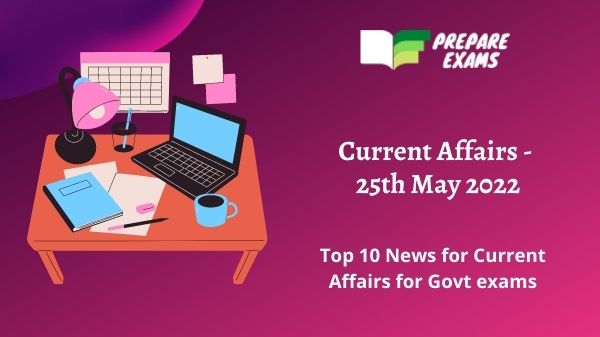 Subhash Ola won the 1st prize for the Amazon Smbhav Entrepreneurship Challenge 2022 and his enterprise “Geniusenergy Critical Innovation Private Limited” has won the Start-up of the Year award.

The 4th edition of the Indian Navy-Bangladesh Navy Coordinated Patrol (CORPAT) was commenced in the Northern Bay of Bengal on 22nd May 2022. Indian Navy and Bangladesh Navy participated jointly patrolling along the International Maritime Boundary Line (IMBL) till 23 May 22.

Belgium becomes the first country in the world that has made a 21-day quarantine compulsory for monkeypox patients. the country has reported four cases of the disease.

Manchester City won 2021/22 Premier League champions and it was their fourth title success.

A 10-year-old champion skater from Worli, Rhythm Mamania becomes one of the youngest Indian mountaineers who have summited the Everest Base Camp (EBC) in the Himalayan ranges in Nepal.

Formula One (F1) world champion, Max Verstappen has won the Spanish Grand Prix and took over at the top from Ferrari’s Charles Leclerc, who got retired with an engine failure while leading at Circuit de Barcelona-Catalunya.

World Turtle Day is observed on 23rd May every year across the world. the main objective of this day is to create awareness among people to protect turtles and tortoises and their disappearing habitats.