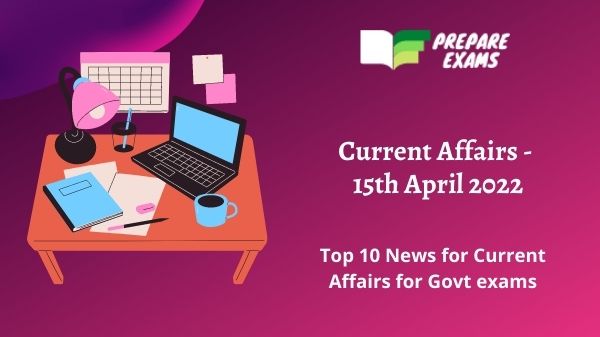 Mumbai and Hyderabad recognised as ‘2021 Tree City of the World’

United Nations Food and Agriculture Organisation (UN-FAO) and Arbor Day Foundation have jointly recognised Mumbai and Hyderabad City as ‘2021 Tree City of the World’ for their “commitment to growing and maintaining urban trees and greenery in building healthy, resilient and happy cities”.

A conference of the Ministers of Culture and Tourism “Amrit Samagam” was held from April 12th to April 13th, 2022 in view of Azadi Ka Amrit Mahotsav (AKAM).

Indian author Prem Rawat has launched his new book titled ‘Hear Yourself’ for the Indian subcontinent in Mumbai.

Ecuador, in South America, has become the first country to recognise the legal rights of individual wild animals and has created history by doing this when the world is battling climate change and exploitation of animals.

Vice President of India M. Venkaiah Naidu has awarded the International Gandhi Awards for Leprosy, 2021 to Dr Bhushan Kumar of Chandigarh in New Delhi on April 13, 2022. he was conferred with an award under the Indian nomination (individual) category and Sahyog Kushtha Yagna Trust, Gujarat under the institutional category.

Foreign Secretary Harsh Vardhan Shringla will be elected as coordinator for the G20 summit. India is going to host the G20 summit in 2023.

The Airports Council International (ACI) has released the list of the top 10 busiest airports worldwide for 2021. as per the list, Hartsfield-Jackson Atlanta International Airport (ATL) has topped the list with 75.7 million passengers.

The day of 13th April is observed as International Turban Day since 2004. the main purpose of this day is to create awareness of the strict requirement on Sikhs to put the turban as a mandatory part of their religion.

World Art Day is observed on 15 April every year across the world to emphasize the importance of art that nurtures creativity, innovation and cultural diversity for all peoples. The International Association of Art (IAA) declared this day.