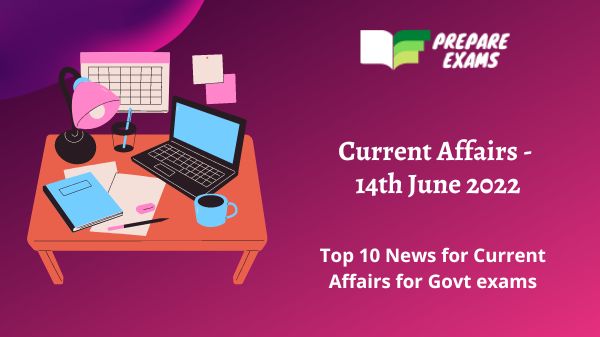 Union Finance Minister, Nirmala Sitharaman has inaugurated the National Museum of Customs and GST “Dharohar” in Goa. it is a part of the Azadi Ka Amrit Mahotsav Iconic week of the Ministry of Finance, being celebrated between June 6 to June 12th, 2022.

Karkinos Healthcare has launched the ‘Advanced Centre for Cancer Diagnostics and Research’ in Kochi and was inaugurated by Kerala Chief Minister Pinarayi Vijayan.

Reserve Bank of India (RBI) has approved the appointment of R Subramaniakumar as Managing Director and CEO of the RBL Bank for three years tenure.

Every year, World Blood Donor Day is observed on 14 June across the world. the day aims to create awareness of the need for safe blood and blood products, and it also thanks blood donors for their voluntary, life-saving gifts of blood.